Meet the New Boom, Different from the Last Boom

Meet the New Boom, Different from the Last Boom

The price of oil “has legs,” as they say.

Running bulls are calling for another era of $100+. The last time we saw that number flicker on a quote screen was July 2014. But today’s market feels more like circa 2007. Robust oil and gas consumption tugs against reluctant production. While geopolitical tensions — think Russia, Ukraine, Middle East — act as a dark, phantom force to the upside.

The here-and-now price of a barrel has topped US$80 (WTI), which is a milestone. Any price with an 8 in front of it goes beyond mere curiosity — fiscal consequences ensue outside US$50 to US$70, the range where supply and demand are balanced. Every $10-a-barrel increase is another billion dollars a day changing hands. That’s a lot of coin going mostly into the pockets of resource owners, operators and their investors. Adding to the jingle are strong natural gas prices.

Over the past decade we’ve seen a huge build-out in renewable energy sources and great progress in pushing electric vehicles off assembly lines. Yet despite the forces of substitution, divestment and the persistent pandemic, 100 million barrels of oil are still flowing through the veins of the global economy.

Worldwide oil consumption will eventually peak and roll over. But many acknowledge that day is still several years away. Meaningful decline is unlikely until the 2030s.

So, escalating oil and gas prices remain of major consequence to Canada. Western provinces and Newfoundland and Labrador are the prime beneficiaries. Alberta dominates the share of output, with roughly 80% of all Canadian production.

The torque to higher oil and gas prices is staggering. In 2021, as commodity prices rose from the dead, Canada’s industry generated an estimated record C$158 billion of revenue. Previously, the high-water mark was C$149 billion in 2008. If oil price (WTI) averages a base case of US$73 a barrel this year, the annual Canadian sales bar could climb to C$173 billion. 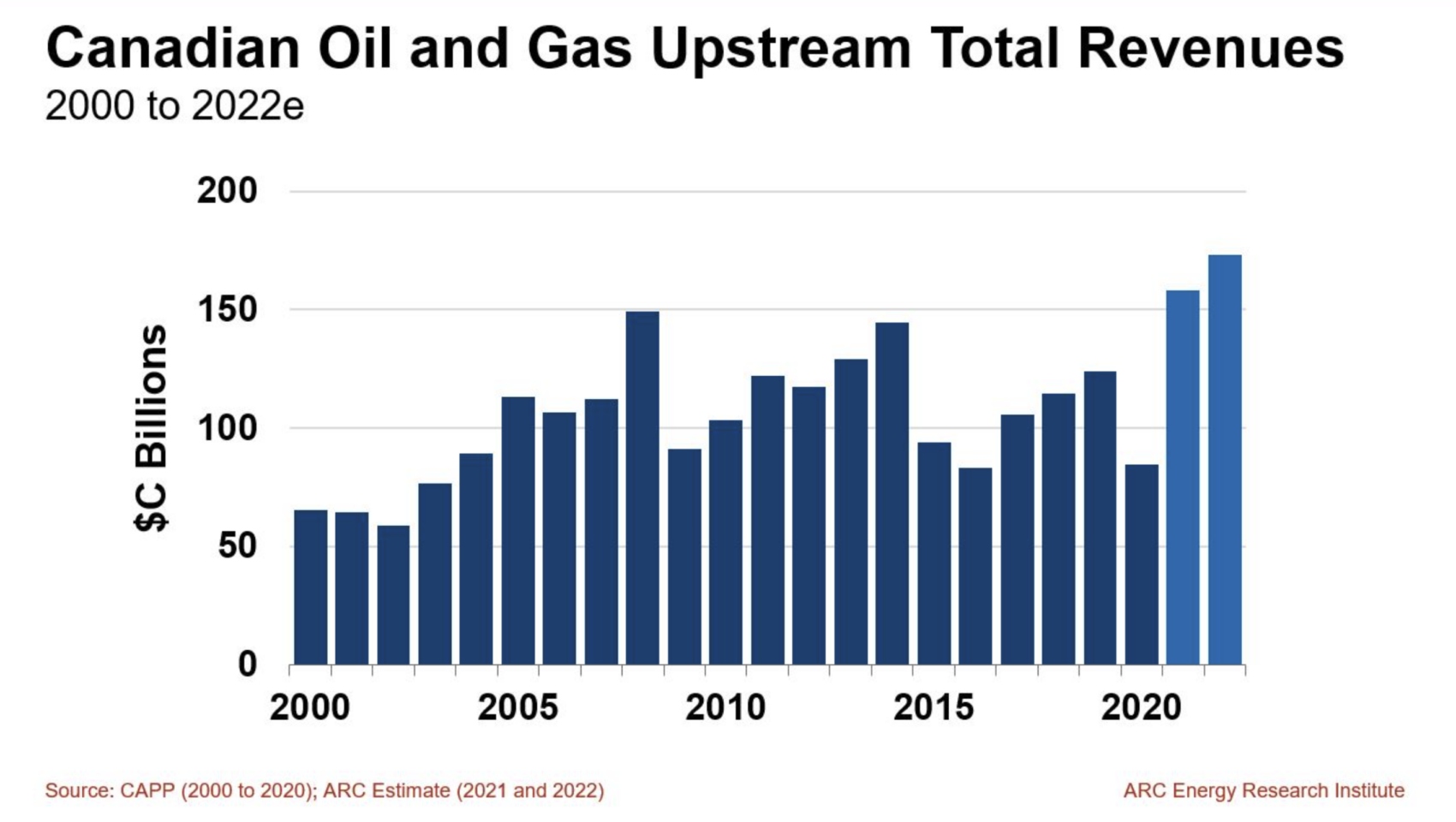 Since 2007, combined oil and gas production in Canada has grown 35%, mostly on the back of the oil sands expansion era between 2012 and 2019. Canada now produces about 8 million barrels of oil equivalent per day, the fourth largest hydrocarbon jurisdiction in the world after Russia, Saudi Arabia and the United States.

The last time oil was charging toward US$100/barrel, between 2006 and 2008, Canada’s loonie was a “petrodollar,” highly correlated to oil price movements. Today, the loonie treads water around 80¢ to the US dollar and is mostly deaf to the call of hydrocarbons.

Implication: If the loonie holds around 80¢ while the price of oil goes up in US dollars, producers will realize 25% greater revenue in Canadian dollars compared to the last bull run.

It’s been a while since pipelines were dinner conversation. Problems with takeaway capacity plagued much of the last decade, with 2012 to 2014 and 2018 proving to be particularly acute pinch points. Since then, pipe and rail export capacity has expanded. At the same time, production growth has substantially eased. So, for now, the grid of North American oil transport can take away Canada’s oil production without constraint.

Implication: Higher and more stable revenue. Canadian oil prices now reflect unconstrained differentials, unlike the prior decade, which was characterized by volatility and periods of steep discounts.

Nothing sharpens the commercial mind more than thin margins. Persistently low commodity prices over the past half dozen years, combined with pressure to reduce carbon emissions through efficiency gains, have prompted hydrocarbon producers to significantly lower their costs.

Cash flow is the first-line measure of profitability. Last year was a big year at an estimated C$89 billion, compared to the previous high of C$92 billion in 2008. This year, industry cash flow could top C$100 billion for the first time.

Implications: Among the many implications, higher royalties from Alberta’s oil sands projects are notable. In the depths of the pandemic, total royalties across all provinces were less than C$4 billion. In 2021, their treasuries grew to over C$12 billion. This year, Canadian oil and gas royalties could top C$18 billion.

Shareholders are the big beneficiaries of free cash flow in this bull run. Dividends and share buybacks are attracting investors seeking cash returns, driving equity prices higher. Because of ESG and divestment pressures, the shareholder base has turned over in many oil and gas companies — this new wave of investors is reaping the reward.

Historically, North American oil and gas companies invested all their cash flow back into the ground, drilling to add more reserves and boost production. Since about 2018, investment into output growth has required permission from investors. The new crop of shareholders has spoken: more cash, less oil and gas.

Implications: Less investment diminishes the ability of free-market oil suppliers to respond to demand for petroleum products, reinforcing expectations of higher prices. Lower capital expenditures by the industry also mean producers are more cash taxable, which adds to government coffers, both federal and provincial. However, less drilling also means that spending in rural economies, where the oil and gas fields are, is not nearly as strong as it has been in past high oil price eras.

Perhaps the greatest change between the last bull run and now is the structure of the industry. The buyout of foreign multinational interests — for example, Statoil, Chevron, Murphy Oil, Marathon Oil, Devon, Shell, Husky and ConocoPhillips — by Canadian corporations has repatriated decision-making power around these assets into downtown Calgary. Suncor, Cenovus and Canadian Natural are the big beneficiaries of these acquisitions. Retrospectively, the foreign multinationals financed much of the oil sands expansion between 2000 and 2015, then sold the projects at losses to domestic operators.

Implication: Cash flow generated by the Canadian oil and gas industry, especially from the oil sands, is more contained. In other words, profits being generated from local resources aren’t going out the back door to foreign head offices.

As in past eras, escalating oil and gas prices will tilt the fiscal balance between producers and consumers. The ensuing inflation will challenge notions about energy security, affordability and transition.