The Social Costs of Energy Transition

The Social Costs of Energy Transition

In February, the Energyphile Book Club discussed the social costs of an energy transition. What happens when a community loses the primary resource it’s built upon? How does it avoid being relegated to ghost town status? Can a “just transition” save it? What does that even look like?

That term — just transition — gets thrown around a lot. It’s the notion that government and society are responsible for helping people affected by the decay of an industry they rely upon, so no one gets left behind. The principle of just transition is typically applied to regions that have a high concentration of workers dependent on a waning business, often in resource sectors like mining, forestry, oil and gas.

As one book club participant pointed out, “We always seem to be trying to implement a just transition after the fact, never in advance.” It’s hard to have a just transition when you don’t see the change coming. For example, retailers and restaurants couldn’t have foreseen the wallop the pandemic would deliver to their businesses. They had no time to prepare.

That’s not the case with oil- and gas-producing regions. For over a century, they’ve experienced booms and busts, and have generally ridden them out, but, this time, the downturn feels decidedly different. We’ve seen it coming for a while, and we can also see there’ll be no great boom on the other side. As the IEA remarks in its Oil 2021 report, the global oil market “may never return to ‘normal.’”

So, over the course of a couple of virtual group discussions, with 20 people from diverse backgrounds in each session, we explored how we could get ahead of things this time around.

We always seem to be trying to implement a just transition after the fact, never in advance.

What’s to become of them?

We based our discussion on the Energyphile story Stairway to Hell. This cautionary tale is about Bankhead, a once-bustling coal mining town near Banff, Alberta. But the mine was plagued by many challenges — among them the competitive assault of the new fuel in town: oil — and in 1922, management shut down operations. For the people of Bankhead, there was no just transition.

“As I walked through the remains of Bankhead,” Peter observed, “the eeriness of it all struck me. It made me think about what happens when people are displaced like that.” 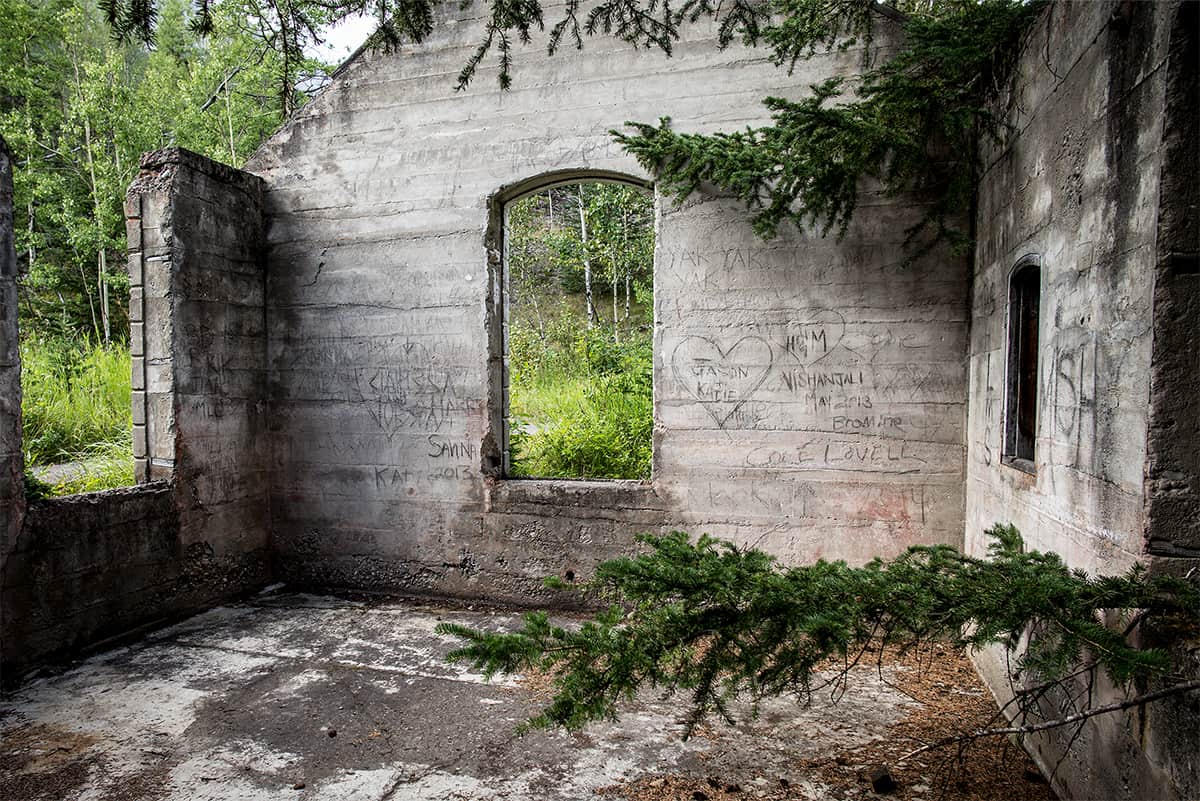 This lamp house was where Bankhead’s miners started and ended their day. Now its crumbling walls are covered in graffiti.

CNN recently featured Gillette, Wyoming, the town that “powers America” through its coal production. In the boom, it was so crowded that people lived in tents, and the elementary school had two shifts to accommodate all the students. Gillette’s mayor marks 2016 as the year it all collapsed. “It was like a perfect storm because oil went down, coal went down, natural gas — everything.” Now the town is struggling to reimagine itself as its residents deal with unemployment, worthless houses and an uncertain future.

Today, as the economy weans itself off fossil fuels and the world drives to net zero carbon emissions, Alberta towns built on coal, oil and gas are contemplating a similar future. What’s to become of them if hydrocarbons yield quickly to alternative energy systems?

In the current circumstance, we hear words like “retrain,” “retool,” “pivot,” “diversification” and, yes, “just transition” bandied about. “But what good are buzzwords when you’re the person who just wants to go to work?” wondered one book club participant. People have established lives, livelihoods and families in these towns. It’s not realistic to expect them to uproot all that. And the older people are, the harder a transition can be. Is a 50-something who’s worked their whole life on the rig likely to take up coding and be happy sitting at a desk all day?

What good are buzzwords when you’re the person who just wants to go to work?

All hands on deck

So, how can we do things differently this time around to ensure a just transition? The general consensus among the two book clubs was that the solutions must be an all-hands-on-deck effort — wide-ranging, long-term and built from the ground up.

Government can introduce initiatives that can help level the playing field and “fertilize the seeds of the industry going forward,” remarked one participant. But government isn’t necessarily an industry expert, nor can it move as quickly as needed sometimes.

That’s where private sector comes in — and the energy industry itself. Deborah Yedlin, a business journalist and Chancellor of the University of Calgary, referred to the industry as “the biggest science lab in the world right now,” as it innovates on how to produce energy better, cleaner, cheaper. That innovation is opening up new opportunities and attracting new talent.

Then there’s the people affected by these transitions, the ones who simply want to go to work. Personal agency is key. Mark Szabo, author of Fight Different, raised the concept of social capital. As opposed to social license, which is based on external acceptance and out of an organization’s control, social capital relies on engagement within, with affected people working together to find a solution that works for all. Rather than forcing individuals to adjust, social capital says, “How are we going to do this as a group?”

Most solutions so far aren’t sustainable nor sufficient. Bright spots have been very localized.

Some regions are embracing renewable energy, installing fields full of solar panels or wind turbines. In fact, the Canada Energy Regulator’s March 2021 report, Canada’s Renewable Power, forecasts that Alberta and Saskatchewan are set to outpace the rest of Canada in the transition to renewable electricity. While those operations may help recoup lost tax revenues, they tend to require fewer people to run them. Some towns have turned to tourism — museums, theatres, outdoor adventures — but those hardly make up for lost revenue, nor the loss of high-paying jobs.

John D. Sutter, who wrote that feature on Gillette, isn’t terribly optimistic about the future of such resource communities. “Here’s an inconvenient truth: Towns like Gillette tend to fail,” he writes. “I asked economists, environmentalists and policy experts. None could provide a sunny case study — the story of a town whose main industry didn’t take the initiative to remake itself.”

Energyphile Book Club participants, however, were more optimistic, probably because they do see the industry taking the initiative to reinvent itself. “It’s already part of the solution,” said one. “There’s incredible innovation underway.”

And they had a few ideas. Some see great opportunity in the burgeoning alternative energy systems: CCS, hydrogen and geothermal. Others were thinking outside the energy box — data farms or cannabis operations (which Drayton Valley has already expanded into). Still others saw at least one beneficial fallout of the pandemic: now that people can work remotely, many are opting to remove themselves from big cities. With small towns like Hanna offering a fibre network and more relaxed lifestyle, that makes for an easier transition.

The mood in general seems to be changing. Todd Hirsch, Chief Economist at ATB Financial, was in the coal village of Forestburg back when it was being “read its last rites.” At the time, he saw a lot of anger and blame, denial and finger-pointing, a sentiment shared by similarly affected communities across the province. However, in the last few years, he’s seen a change in tone. “On balance, there’s more hope than despair.”

Peter agrees. “The energy industry has always been a boom-or-bust industry. In the boom times, it’s like a big party,” he notes. “It’s easy to forget what the bust cycle feels like.” But people who live in resource towns are resilient. “It’s in their DNA,” he says.

And, this time, he believes we’ve finally learned: the party is over. Notwithstanding the “beating up” Alberta has had, he’s optimistic about the future of these communities. “We have it all in this province: the natural resources, incredible assets and people, infrastructure. We’re battle-hardened, and we’re moving forward toward greater resilience.”

Twice every month, Energyphile Book Club gathers to discuss topics like this. The event is exclusive to subscribers, so sign up now if you haven’t already and join us for our next conversation.